SUVA hosiery has a long and dignified history.
The predecessor of the company is considered to be “AS RAUANIITI”, founded in 1919, whose main products were originally ribbons and cords. By 1925, the company had expanded so much that the assortment already included socks, stockings, tights and hosiery.

In 1940, the production units and assets of the public limited company were nationalized, and from 1944, the textile factory “Punane Koit” was already operating. Stockings and socks were continued, but the production of cider fabrics and textile haberdashery was also started. For a long time, the former Soviet Union played a leading role in the production of socks and stockings.

From 1991 it continued under the name RAS SUVA. In 1993, the factory was privatized and AS SUVA Sukavabrik, operating with 100% domestic capital, was formed, which is still the largest in Estonia. 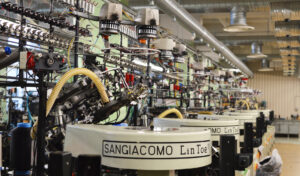 SUVA socks are available all over Estonia in well-stocked stores, in our factory store and also in our own e-store, which has become very popular. The clients praise the quality and design of our socks.